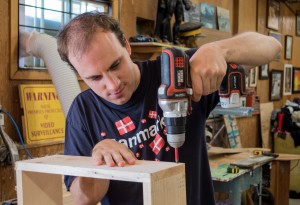 Our games were used at the Senior Olympic Games held at Acadia University. They have gone to every province in Canada and to Nunavut and the North West Territories. We know that the game has gone to a number of United States as well.

Washer toss is a great game to take along on a camping trip. It can be played at the cottage or in the back yard. The game does not take up a lot of room and playing the game is a great ice-breaker as almost anyone can play it. We make games year-round in order to keep up with the demand.

If you lose a washer you can purchase replacements from The Flower Cart Group. That’s where Santa buys his Washer Toss games!

There is no internationally sanctioned body that has set the rules for the washer-toss game – that we are aware of. There are regional discrepancies in the design of the game and the rules. Following are the rules as we know them.

6. The object of the game is to accumulate 21 points. You win at 21 points, meaning that you need the exact number of points to finish the game. If you have 20 points you must land in the 1 point area to win the game.
7. “Leaners” are open to interpretation
8. House rules are acceptable and encouraged to settle disputes and have more fun!

1. This is a game to be used for fun.
2. Children should be supervised while playing the game in order to ensure they are not hit by a washer.
3. Stand back from the box when you are not tossing a washer yourself.
4. Washer manufacturers make washers from scrap metal and they are not precisely uniform in weight. However, all washers have been weighed and are within 5 grams of each other for optimal performance.